298/1572) Thirsty and Miserable:  Life Sentence, a collaboration between Great Lakes Brewing and Amsterdam, both of Ontario:  **1/2;  a 10% triple IPA;  tropical fruit nose;  tropical fruit notes with an astringent resiny edge;  Katie stopped by to ask my opinion - she is a fan of this one;

I found this later at the GLB retail Store. 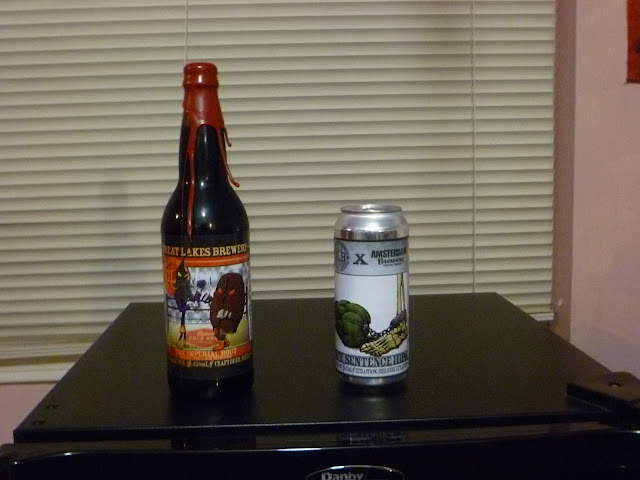 This one ran out in mid-pour but it was enough to form an opinion, about three-quarters of a pint.  Just the same, Katie said she was calling it a two dollar glass.

300/1574) Thirsty and Miserable:  Christmas Eve At A New York CIty Hotel Room by Eviltwin Brewing of Connecticut, U.S.A.:  **1/2;    10% Imperial Stout;  pours very dark;  a slow sipper - it makes me wish it had been colder outside (the outdoor rink near my office opened only today):  very warming;  the nose features strong alcohol notes, chocolate and mocha are present throughout with bitter coffee;  wonderfully complex;

This was a tin from the fridge.  Her bottle and can selection befits a much larger joint and lately I have been reading both lists when I visit, not just the draught list.

301/1575) Thirsty and Miserable:  Roasted Chestnut Brown Ale by Oast House of Ontario:  **;  5.3%;  chestnuts add a sweetness and you can detect their flavour in this beer along with milds spices and nuttiness;  very uncommon;

This was another half pint as I had to scram but I must say Katie was in fine form tonight.  I suspect her good mood was at least party due to no one ordering anything but beer.  It pains me to report, however, that I did spot a television screen but it was not turned on and the truth is, I have no way of knowing if it actually works.  There was a notice of some sort taped on it anyway.

I don't know if my favourite pub site takes requests but the combination of this blogger's droll and sophisticated wit and these surroundings would make for a review I would want to read at <https://torontopubs.wordpress.com/>.  My wish would be that Katie is working that night in order to have the full-on experience recorded.

It bears repeating that it is cash only at Thirsty and Miserable.