130/1404) Home:  Legends of the Bay - Ghosts of Hope Island by Hockley Valley of Ontario:  *1/2;  5%;;   brewed by Hockley Valley for Midland Beer Works of Tiny, Ontario;  this the the second edition of a "limited series";  malty, bitter Eurohop nose;  single dimension hoppiness;

The story goes like this:  according to local legend, a pair of fishermen were murdered by an anti-social lighthouse-keeper.  There bodies were not found where they were said to have been left and today, owing to numerous unexplained  phenomenon, no one will live on Hope Island.

131/1405) Home:  Legends of the Bay - Giant's Tomb by Hockley Valley of Ontario:  *1/2;  5%;  somewhat similar to the one above, especially the nose;  sweet almost honey like malt;  as above, Hockley Valley brewed this for Midland Beer Works;

This legend comes from the Hurons of Kitchikewana, a god and giant who was guardian of Georgian Bay.  Rejected by his choice of wife, he hurled fistsful of earth from Beausoleil Island into Georgian Bay in his rage, creating the 30,000 islands and the five bays of Georgian Bay in the process. 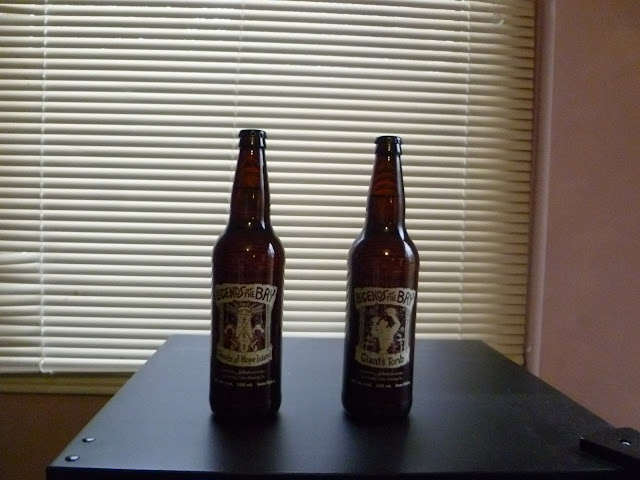