66/1340) Harbord House:  Octopus Wants To Fight by Great Lakes Brewing of Ontario:  **1/2;    6.2%, 88 ibu;  brewed with eight malts and eight hops;  someone tried to sell it to me as sessionable;  cloudy;  grapefruit and tropical fruit nose; citrusy flavours with tropical notes;  someone thought they tasted Juicy Fruit gum; 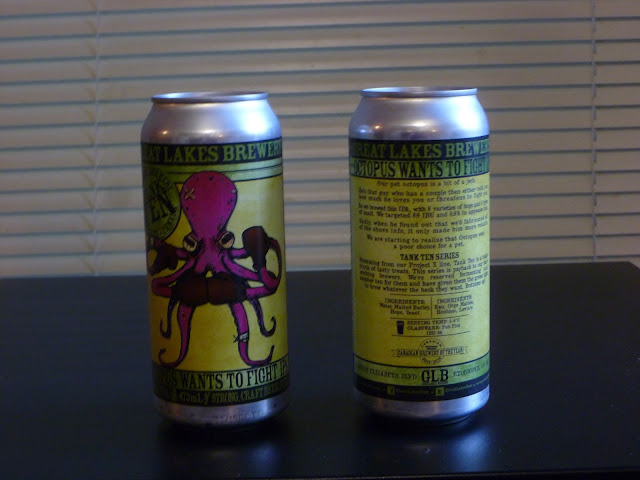 This was a Cask Social event.  The Harbord House is not to be confused with the Harbord Room.  They have Black Katt on tap.  I must go back.

68/1342) Thirsty and Miserable:  Bricks and Mortar Coffee Porter by Left Field Brewery of Ontario:  **1/2; 6%, 40 ibu;  brewed in collaboration with Pilot Coffee Roasters;  Kenyan Kii coffee beans were added directly to the tank during the seven days of cold conditioning;  coffee nose with a  touch of mocha sweetness;  rich coffee flavours;

Brewed to mark the opening of their bricks and mortar brewery location.  Until now they were strictly a contract brewer.  I suppose we can forgive no baseball reference.

The highlight of the day was meeting my eldest son at Thirsty and Miserable and sharing a bottle of Omnipollo Hypnopompa Imperial Stout.  He was impressed enough to take a photo of the bottle.  I hear tell these are hand painted which means each one is a bit different.  I might have met him earlier but I think I let it slip that Cask Socials feature a lot of people who sort of look like me.